Posted by Learning Lab at 8:24 AM No comments:

It's NOT crazy to talk to yourself. 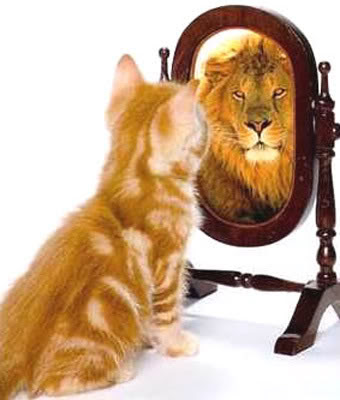 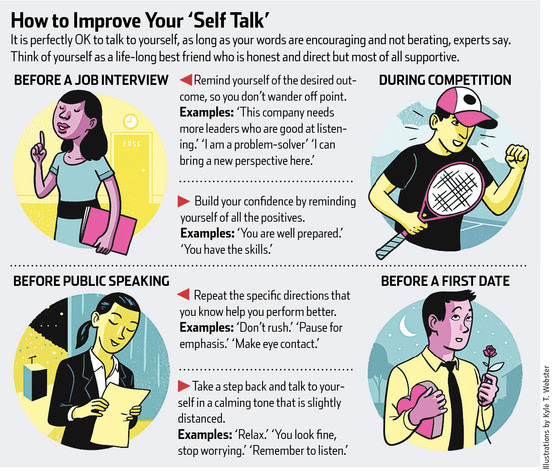 If you like to read, here is the script from the video:
There are two ways to "self talk" to yourself, and each one can have a positive or negative effect. Elizabeth Bernstein joins Lunch Break to discuss. Photo: Getty.
Do you ever talk to yourself?
Be honest.
Researchers say talking to yourself, out loud, is more common than many of us might care to admit. Psychologists call it "self talk" and say how we do it makes a big difference in both our mood and our behavior.
Most people engage in self-talk, experts say, though some do it louder and more often than others. When I asked, I heard from people who talk to themselves in the basement, in their cubicle at work and at the urinal in the men's room. One woman turns the car radio down so she can hear herself better.
Self-talk is what happens when you make yourself the target of your own comments, advice or reminders. Experts consider it a subset of thinking. You're having a conversation with yourself. 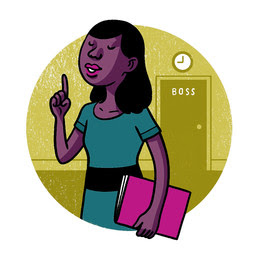 Tell It Like It Is | It's OK to talk to yourself, with honest feedback and encouragement, experts say. Kyle T. Webster
My father talks to himself pretty much everywhere, including at the dinner table. He is more interested than anyone else is in what he has to say, he says. He taught my two sisters and me to high-five ourselves when we do something well.

Sometimes self-talk is automatic. Other times we do it deliberately to influence our own behavior. "What happens with self-talk is you stimulate your action, direct your action and evaluate your action," says Antonis Hatzigeorgiadis, associate professor at the University of Thessaly in Trikala, Greece, who studies self-talk and the psychology of sports performance.
Motivational self-talk includes what we say to psych ourselves up: "Come on!" "Let's go!" "You can do this!" Instructional self-talk walks us through a specific task. If you are driving, you might tell yourself to turn right at the next light, and then you do it. "It sounds simple, but you get the correct reaction," says Dr. Hatzigeorgiadis.
Instructional self-talk is helpful when learning or practicing a new sport or task, he says. For example, a swimmer can remind himself to keep his elbow high during freestyle. Before giving a speech, someone might tell herself, "Speak slower" and "Make eye contact."
It is important to be short, precise—and consistent. "You have to sustain it," Dr. Hatzigeorgiadis says. "You instruct yourself until it becomes automatic."
The way you address yourself matters, too. Research published in the Journal of Personality and Social Psychology in February found people who spoke to themselves as another person would—using their own name or the pronoun "you"—performed better under stress than people who used the word "I."
In one study, University of Michigan researchers induced stress in participants by telling them they had to prepare a speech to give to a panel of judges about their qualifications for a dream job. They were given five minutes to prepare and told they couldn't use notes.
Half the participants were instructed to work through their anxiety using the first-person pronoun ("Why am I nervous?"). The other half were told to address themselves by name or the pronoun "you" ("Why are you nervous?"). Afterward, each participant was asked to estimate how much shame he or she experienced right after the speech, and how much subsequent ruminating they did.
The results were consistent: People whose self-talk used their names or "you" reported less shame and ruminated less than the ones who used "I." The judges found the performances of those using "you" to be more confident, less nervous and more persuasive.
When people think of themselves as another person, "it allows them to give themselves objective, helpful feedback," says Ethan Kross, associate professor of psychology and director of the Self-Control and Emotion Laboratory at the University of Michigan.
Don Ingraham, a 77-year-old retired chief executive of a chemical distribution company, has been talking to himself for more than 70 years. He was a lonely child—his brothers were much older—and invented three imaginary friends, Bobby Palmer, Bobby Engine and Ainsley Oates, with whom he had regular conversations.
As an adult, Mr. Ingraham compliments himself when he does something well, such as the level base he built for an outdoor sink on the flagstone patio at his Austin County ranch, in Texas.
"Good job!" he said to himself. "You took the time to make it right." Sometimes, he scolds himself. He says it's his conscience speaking. While cleaning up tree branches after an ice storm this winter, he accidentally jabbed a sharp stick into his arm. "I used some barnyard words that follow the word 'dumb,' " he says.
Both positive and negative words can influence us in positive and negative ways. Say to yourself, "This job interview is going to be a cakewalk," and you might not get pumped up enough to ace it. Conversely, tell yourself, "You just lost that match, you need to focus harder," and it could spur you to do better in the future.
With critical self-talk, identify why you are being negative and focus on making it better. Don't say: "I bombed that presentation." Say: "That wasn't your best effort. You need to buckle down now and try harder."
Kathy Gruver, a 44-year-old alternative-medicine practitioner in Santa Barbara, Calif., once made herself cry while talking to herself about what to say to her then-boyfriend, who hadn't called when he said he would.
Since then, she has learned to speak to herself positively. She repeats daily affirmations, coaches herself on handling difficult clients and walks through the steps of her flying-trapeze workout. "I think it's healthy to talk to yourself," she says. "Throw your Bluetooth in, so people think you're on the phone, and let it all out."
—Write to Elizabeth Bernstein at Elizabeth.Bernstein@wsj.com, or follow her on Facebook and Twitter at EBernsteinWSJ.

Posted by Learning Lab at 6:18 AM No comments:

Posted by Learning Lab at 7:06 AM No comments:

How Stress can be your Friend

Know that stress is normal.

Read this research to yourself before your big test to take advantage of stress:

"Sometimes in important situations, people notice that they have a faster heartbeat, sweaty palms, shortness of breath, butterflies in their stomach, and lots of energy running through their body. People usually think that this means that they are nervous, anxious, or worried. However, these feelings happen for all kinds of reasons, and it does not mean that we need to feel worried or nervous. For example, we feel this same way when we are excited about a surprise, when we are getting ready for a fun sports competition, or when we fall in love. So, feeling a faster heartbeat, for example, doesn't mean you will perform badly. Having these feelings could actually help you!
This is because when people care about something, such as doing well on a test, our body's nervous system tells the body to release energy and deliver more oxygen to the brain. This helps you to stay alert and pay attention to the important thing that is going on in your life. Therefore, experiencing a faster heartbeat, heavy breathing, or sweaty palms could actually be a good thing. It is your body's way of pumping you full of energy and attention! It all depends on whether you choose to use this energy. ..."

from https://blogs.edweek.org/edweek/inside-school-research/2019/01/writing_exercise_helped_poor_students_pass_biology.html
Posted by Learning Lab at 8:38 AM No comments:

Ways to break the stress cycle - everybody should have at least two!

Cross and uncross your legs (at ankles) and arms (like a self-hug) for about 2 minutes. The pressure relieves stress.

Push hands up on the underside of your desk for 3 seconds and release; repeat.

Lean on desk/table with your forearms, release the pressure; repeat.

Interlock thumb and forefinger of each hand, like a link, pull. Do this with each set of fingers.

Sitting, put your hands on your legs and press down. Let your arms go floppy. Take a deep breath.
Repeat:  hands on legs, press, floppy, breath. Do this five times.

Keep a special worry stone/item in your pocket to hold on to and focus on.

Keep a special picture/quote on your binder to look at and focus on.

Look up breathing exercises.. Do yoga.

Take a walk; include up and down stairs or an incline.


For those of you whose evil twin perfectionist is getting in your way:

Divide the tasks at hand into small, manageable steps. Praise yourself, every little step of the way!

Compare yourself to......YOURSELF. Are you doing better this week than last week?

Develop tolerance - for others....for yourself.

"Learn to see life in all its shades. Learn to think in gradations."

Remember your senses..including balance and humor. Laugh, learn to let others laugh.

Put words to what you are afraid of. Share these with your guidance counselor.

Google "overcoming perfectionism." You are not the only one!

Posted by Learning Lab at 7:59 AM No comments:

Posted by Learning Lab at 5:11 PM No comments:

Posted by Learning Lab at 8:25 AM No comments:

Learning Lab
An academic drop-in center providing student support through out the day. We will help you with your assignment OR we will connect you with someone who can. All are welcome. Find us in #215 - the room with the office chairs!